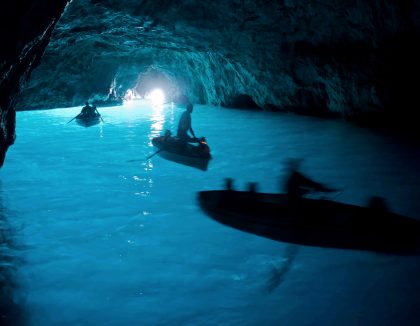 The Blue Grotto is one of several sea caves, worldwide, that is flooded with a brilliant blue or emerald light. The quality and nature of the color in each cave is determined by the particular lighting conditions in that particular cave.

In the case of the Blue Grotto, the light comes from two sources. One is a small hole in the cave wall, precisely at the waterline, that is a meter and half in diameter. This hole is barely large enough to admit a tiny rowboat, and is used as the entranceway. In photographs taken from within the cave, the above-water half of this hole appears as a spot of brilliant white light. The second source of light is a second hole, with a surface area about ten times as large as the first, which lies directly below the entranceway, separated from it by a bar of rock between one and two meters thick. Much less light, per square meter, is able to enter through the lower opening, but its large size ensures that it is, in practice, the primary source of light.

In part because of the dazzling effect of the light from the above-water opening, it is impossible for a visitor who is in one of the row-boats to identify the shape of the larger hole, the outline of the bar that separates the two holes, or even the nature of the light-source, other than a general awareness that the light is coming up from underneath, and that the water in the cave is more light-filled than the air. A visitor who places a hand in the water can see it "glow" eerily in this light.

The grotto was known by the Romans, and apparently used by the Emperor Tiberius during the years when he retired to Capri. Roman sculptures of the appropriate period showing Neptune and tritons have been recovered from the cave and it is thought more might lie on the deep bottom. This discovery, the remains of an ancient landing place and the work on an underground tunnel, create an image of a natural cavern adorned by statues. The grotto was known to the locals under the name of Gradola, after the nearby landing place of Gradola, but it was avoided because it was said to be inhabited by witches and monsters. 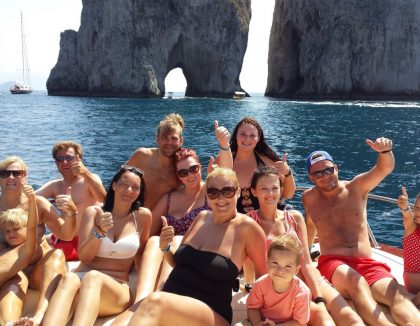